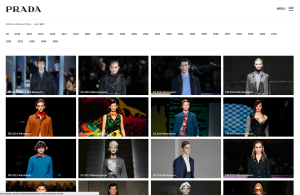 Prada has recently opened up a world generally reserved for the rarified world of academics or by research appointment only, to the masses. Prada’s entire archive of runway shows (photographs and video!), print advertisements, and what the company calls “real fantasies” are now available to all on their newly redesigned website, complete with the occasional photo/model credits and set design background. Organized by year, it serves as a comprehensive resource that spans more than thirty years, suitable for those with a mild interest to an unhealthy obsession with fashion. The fashion show archive begins with the house’s first foray into ready-to-wear in 1988, designed by Miuccia Prada, and concludes all the way up until the present. As a historian and archivist, it is refreshing to see a global company like Prada investing time and money into the preservation of their history. Speaking from personal experience, house archives are generally very low on a company’s financial prerogatives with projects being cut entirely or postponed indefinitely—or horror stories of physical archives being stored in musty basements without proper air circulation. There are rumors of one particular designer whose life’s work has been carelessly shoved into cardboard boxes, unbeknownst to him, all due to his staff’s assumption that funds could be better spent elsewhere. This speaks to the obvious fact that clothing and textile collections are exorbitantly expensive to upkeep. Yet museum exhibitions dedicated to fashion have quickly gained ground in the last several years. They are undeniable crowd pleasers with blockbusters like Alexander McQueen: Savage Beauty (May 4-August 7, 2011) at the MET Museum, drawing in a whopping 662,509 visitors[1], which simultaneously establishes prestige, but also sales for the house.[2] According to the MET, the majority of the pieces in the exhibition were borrowed from the archives of Alexander McQueen in London and Givenchy in Paris. Without the respective houses’ dedicated practice of archiving, exhibitions like Savage Beauty may have never been possible.

Prada’s online archive, beyond being a repository of the house’s women’s and men’s ready-to-wear design history, is a microcosm of fashion show history and by default of runway photography from 1988 until today. Like most fashion houses, Prada employed their own in-house photographer to document their fashion shows. In the pre-digital camera era of the 80s- 90s, photographers predominantly worked with 35mm film cameras to shoot the runway. This is immediately perceptible when reviewing Prada’s runway photographs from this period both due to their grainy quality and the seemingly lack of standardized shots that are widely associated with runway photographs today.[3] More often than not, the model is immediately outside the center of the frame; or a passing model appears in the frame with her; or there is awkward cropping of a model’s head or feet, which comes from shooting that particular look several seconds too late. Unlike today’s runway photographs taken on a digital camera where one can take rapid-fire shots without any financial ramifications, film photography required deftness of hand—with unforgiving results if mistakes were made.

So much about the history of fashion may be gleaned from Prada’s photographic archive. Plus, it’s refreshing to see the youthful faces of some of fashion’s biggest names—Kate Moss, Gisele Bündchen, Naomi Campbell, Amber Valletta, just to name a few—as many of them were just embarking on their illustrious careers. Yet the most enticing aspect of all is that the archive is online, which means that it’s available to not just those living in New York City where most fashion archives are located, but to those living outside of the city as well. Hopefully other designers and fashion houses will follow the practice led by Prada of digitizing their archival collections, once they realize how important it is to preserve and share their house’s legacy so that all can enjoy the art of dress.

2. Ironically the MET’s exhibition, Schiaparelli and Prada: Impossible Conversations that juxtaposed the work of Italian fashion designers Elsa Schiaparelli with Miuccia Prada was “no blockbuster this time around,” according to the New York Times. Only 339,838 total visitors attended the exhibition, almost half that attended the McQueen retrospective. Eric Wilson, “At the Met, No Blockbuster This Time Around,” New York Times, August 20, 2012, http://runway.blogs.nytimes.com/2012/08/20/at-the-met-no-blockbuster-this-time-around/?_r=0 (accessed February 10, 2015).