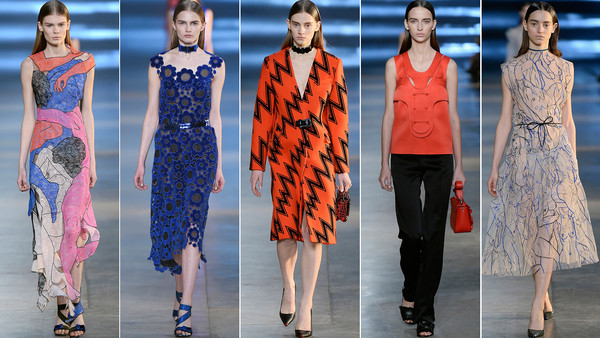 Christopher Kane’s Fall/Winter 2015 ready-to-wear collection beyond celebrating “feeling[s] of attraction and sensuality,”[1] was, in my eyes, a celebration of art and fashion history—not in the literal sense, but in a nuanced manner unique to Kane. Yes, the sexual references abound—phallic-looking slip tabs and silver-tipped pumps, which alluded to nipples, but perhaps it may be my inclination as a fashion historian to also see the historical references in this collection. Kane’s Fall/Winter 2015 collection demonstrates his immense talent and skill to move beyond his supremely well-received freshman collection from Spring/Summer 2007 of bodycon bandage dresses in neon colors to designing collection after collection that are thoughtful while being subversive, wearable yet provocative, all the while playing up the inherent qualities of his chosen materials. This particular collection, more than any, celebrates the art of dress in its tactile materiality. O 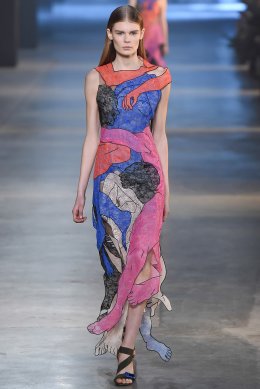 f the several notable ensembles in this collection, the lace dresses comprised of sinuous nude figures that writhe and wrap around the model, were perhaps the most alluring. The highly stylized figures outlined in black were actually drawn by Kane and his team during life drawing classes held at the studio. Stylistically, they are redolent of Henri Matisse’s nude dancers from his renowned painting, The Dance of 1910, but Kane’s treatment—each figure pieced together, I see a nod to mid-1930s Surrealism à la Elsa Schiaparelli.

The uneven hem formed from the figures’ cut out feet that aptly dance around the models’ ankles remind me of Schiaparelli’s masterful use of trompe l’oeil in her “Tears Dress” from the Circus Collection of 1938 designed with the help of artist Salvador Dali. Furthermore, Kane’s choice to use lace for the nude figures evokes human body hair, beautiful and grotesque all at once. 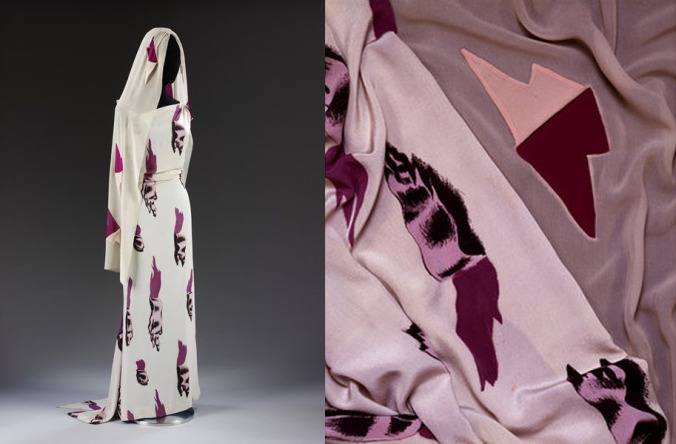 Meanwhile, a shimmering blue and red draped velvet dress seemed to hark back to the heavy, draped fashions of 1913. 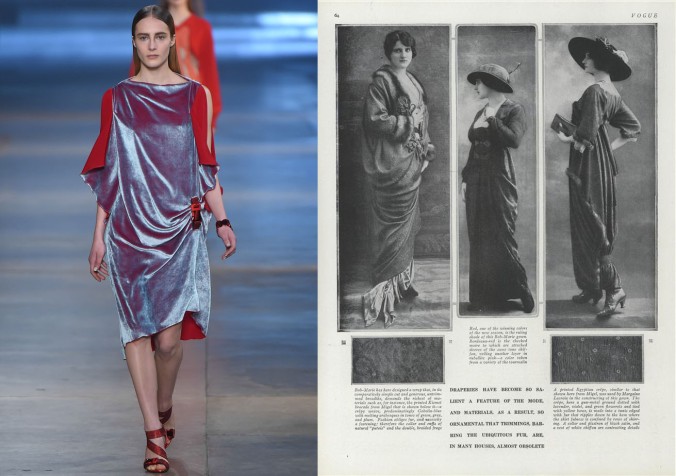 Other historical references include a giant, characteristically 1960s floral Swiss lace that was used in its entirety to create a dress or at times trimmed a chainmail mesh shift that itself coincidentally recalls Paco Rabanne’s mesh “Rabanette”

All over embroidered daisy dress by Emanuel Ungaro and photographed by Richard Avedon. Vogue, March 1, 1966, 171.

A diaphanous, seemingly ladylike sheer dress, embroidered with more outlines of nude figures, could have easily been a chiffon dinner dress by Jean Dessès from 1954.

Tim Blanks of Style.com also saw a nod to Yves Saint Laurent’s Le Smoking jacket in the first look of the collection.[2] 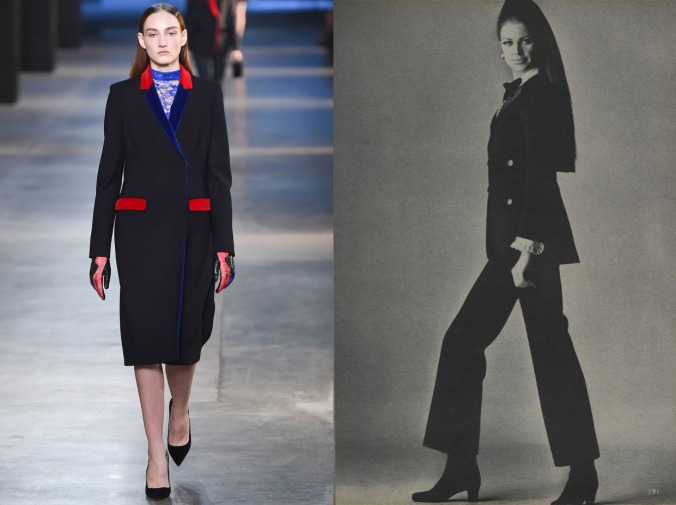 Despite Kane’s numerous references to fashion history, their presence never dilutes the overall strength or novelty of this collection. Nor do they come off in the least bit gimmicky. Rather, Kane transforms and reinvents what have become banal decade-associated tropes and merges them with elements that are distinctly his own.